St Austell - Proper Job. Lovely IPA from Cornwall.
Too old to give up but too young to rest - Pete Townshend

St Austell - Clouded Yellow. An interesting wheat beer that pours clearly but has a yeast sediment at the bottom, apparently you can get a cloudy beer by swirling the last of the beer. Also, it tastes nice, not as sweet as German wheat beers.
Too old to give up but too young to rest - Pete Townshend

Badger - Fursty Ferret. I only got it because some other bugger had taken all the Bombardier from Tesco.

Having said that, it's really nice. It's a full flavoured bitter but with a tiny bit of sweetness. I think it might be my new favourite session beer.
Too old to give up but too young to rest - Pete Townshend

James Boags Premium Larger is the quintessential Australian beer. Boags beers are brewed in Launceston, Tasmania and in true Australian tradition are served COLD of course. We do not abide by lukewarm piss drinking over here mate! That being said, I am a little apprehensive about the concept of beer sourced from a volcano.
"There was a time when religion ruled the world. It is known as the Dark Ages." Ruth Hurmence Green
Top It is absolutely fantastic.

It is absolutely fantastic.

One of my favorite beers. I put a keg on tap at my local fraternal society every spring, back when I was running the bar for it.

A lot of people are unaware it was brewed to commemorate the famous ride of Paul Revere on April 18th, 1775.
ΦΒΚ - Φιλοσοφία Βίου Κυβερνήτης ("Love of learning is the guide of life")
Top

Never been a huge fan of Anchor Steam.. I think it's because I tried on of their IPAs ( full disclosure, NOT A FAN OF IPA, too bitter ). I'm a stout and porter fan myself. If you can't chew your beer, you shouldn't be drinking it. However I also have been known to get down on some...

JK Scrumpy. I figure a Pirate should always have some cider in him to prevent TOO much scurvy.
The circumstances of the world are continually changing, and the opinions of men change also; and as government is for the living, and not for the dead, it is the living only that has any right in it. That which may be thought right and found convenient in one age, may be thought wrong and found inconvenient in another. In such cases, who is to decide, the living, or the dead? -Thomas Paine
Top

Discovered this at a food market on the South Bank in London.

Brewed in Cheltenham, UK, and vegan - and totally delish. Some amazing mix of hoppy and malty at once 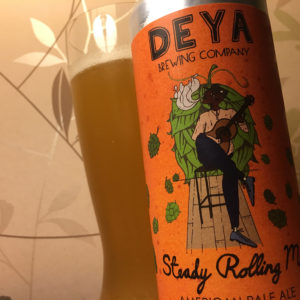 Cardinal Fang wrote:Discovered this at a food market on the South Bank in London.

Brewed in Cheltenham, UK, and vegan - and totally delish. Some amazing mix of hoppy and malty at once

Does yeast count as vegan? (genuinely, I would have thought it came a bit close to the aversion to rennet etc.)

Aww! I got chocolate on my tee shirt and trouseres.
Top

Purple Lil wrote:Aww! I got chocolate on my tee shirt and trouseres.

Go change your diaper and I'll get you some chocolate milk.
Top

Go change your diaper and I'll get you some chocolate milk.

The contents of his diaper could pass for chocolate milk in a photo.
"Mit der Dummheit kämpfen Götter selbst vergebens."
("Against stupidity, the gods themselves contend in vain.")
-- Friedrich Schiller (1759–1805)
Reality is that which, when you stop believing in it, doesn't go away.
-- Philip K Dick
What happens when all the renewable energy runs out?
-- Victoria Ayling
English isn't much of a language for swearing. When I studied Ancient Greek I was delighted to discover a single word - Rhaphanidosthai - which translates roughly as "Be thou thrust up the fundament with a radish for adultery."
Top
Post Reply
194 posts

Users browsing this forum: No registered users and 5 guests