The Person Below Me

It alleviates my constipation .

It was a bit of a shock, to tell the truth, but then I realised i'd slept on my arm.

TPBM suffers from a persecution complex, complicated by delusions of grandeur, tempered with humility.
Roland Deschain - Half prophet, half gunslinger, all Pastafarian!

True , but been there , done that , have been banned .

Well yes...it IS in Swansea...or is it the DVLC I am thinking of.

TPBM passed their driving test at the first attempt (3 for me!).
The smoke wafted gently in the breeze across the poop deck and all seemed right in the world.
Top

We're dicks! We're reckless, arrogant, stupid dicks. And the Film Actors Guild are pussies. And Kim Jong Il is an asshole. Pussies don't like dicks, because pussies get fucked by dicks. But dicks also fuck assholes: assholes that just want to shit on everything. Pussies may think they can deal with assholes their way. But the only thing that can fuck an asshole is a dick, with some balls. The problem with dicks is: they fuck too much or fuck when it isn't appropriate - and it takes a pussy to show them that. But sometimes, pussies can be so full of shit that they become assholes themselves... because pussies are an inch and half away from ass holes. I don't know much about this crazy, crazy world, but I do know this: If you don't let us fuck this asshole, we're going to have our dicks and pussies all covered in shit!

TPBM is not an arsehole.
Roland Deschain - Half prophet, half gunslinger, all Pastafarian!

Oi be a Willy

^ Is not going to trick me into a "giving us the willies" joke.


TPBM knows Jack.
I will honor Monkey in my heart, and try to keep it all the year.
~Charles "Darwin" Dickens
Top

Roland... no strings attached there. ^ RRR I seen 'em do that on tv!

I know Jack and Jim Beam as well and shared the odd Wild Turkey with them.

TPBM knows there is a difference between bourbon and scotch.
Send lawyers, guns and money...
Top

Indeed there is...over to you Roy

If you're not don't worry, just put on a Scottish accent, talk all scientific, mention valves and no one will be the wiser.
The smoke wafted gently in the breeze across the poop deck and all seemed right in the world.
Top

Och aye the noo. Bourbon is a waste of good charcoal that could be used for barbeques and scotch is a type of egg.

TPBM once caught a haggis but it escaped.
Too old to give up but too young to rest - Pete Townshend

I don't believe ^ is Roy because he didn't mention valves or talk scientific enough.

TPBM was arrested for tossing his caber in public.
Send lawyers, guns and money...
Top

Actually quite the opposite...if I return to St Lucia West Indies one more time they have to plant a tree in my honour.

TPBM is an extreme tree hugger 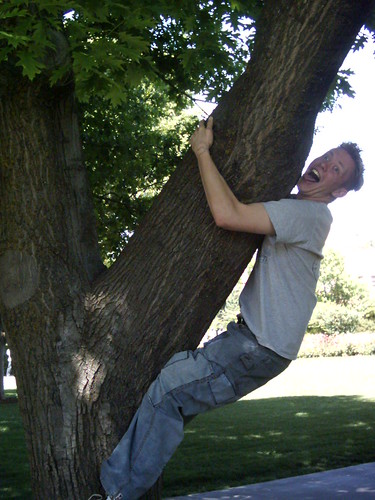 Yeah, so they tell me. Just because I shouted "Stop the car! Look at that!" the other day when we were doing 120km/h down the main road, when I saw this amazing tree in one of the parks, it must have been two hundred years old! And it had the most incredible root system, and its trunk - oh, right. Sorry...

TPBM tends to ramble on and on about their favourite subject whenever anyone will listen.
"There's a hell of a good universe next door, let's go!" e e cummings

"And the new day was a great big fish." Terry Pratchett

"WHAT CAN THE HARVEST HOPE FOR, IF NOT FOR THE CARE OF THE REAPER MAN?" Terry Pratchett (yes again, I'm afraid. He's my absolute favourite author)
Top

Users browsing this forum: No registered users and 10 guests