Q: Why do pirates not be found in shaven havens?

A: Coz they be corsairs!

Q: What do pirates and pimps have in common?

Why did the pirate go to the Apple store? To buy an iPatch!
Top

A: A sunken chest with no booty!
Top

Q: How does a pirate get his mast up?

Q: How do a pirate sing vibrato?

A: He shivers his timbres.
Top

Q: How does a pirate get his mast up?
A: He uses a wench!
Top

I was captured by a dyslexic pirate - he made me wank the plalk!

"Fifteen dyslexics on a dead man's chest, Ho Yo Yo and a rottle of bum"
Top

A Pirate walks into a bar and orders a rum

A pirate walks into a bar wearing a paper towel on his head. He sits down at the bar and orders some dirty rum.

The bartender asks, "Why are you wearing a paper towel?"

3.14% ov Sailors arrrgh πrates
I will honor Monkey in my heart, and try to keep it all the year.
~Charles "Darwin" Dickens
Top 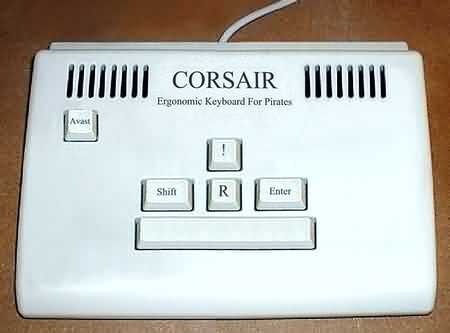 I saw Nancy Pelosi Jump off the Golden Gate Bridge the other day..
being a responsible citizen, I informed the emergency services.
They still haven't responded.

I saw Nancy Pelosi Jump off the Golden Gate Bridge the other day..
being a responsible citizen, I informed the emergency services.
They still haven't responded.

- It's not a pirate joke; sticking "A Pirate told me" in front of it doesn't make it so.
- Those kind of jokes where there's nothing really particular to the subject, and you could really just insert any figure you don't like in, aren't funny. They're entirely dependent on the feeling towards the subject.
- WHY THE HELL DOES A KIWI CARE SO DAMN MUCH ABOUT AMERICAN POLITICS!? Seriously, don't you ever have something to say about NZ politicians?
"How is it that hardly any major religion has looked at science and concluded, 'This is better than we thought! The Universe is much bigger than our prophets said, grander, more subtle, more elegant. God must be even greater than we dreamed'? Instead they say, 'No, no, no! My god is a little god, and I want him to stay that way.'" - Carl Sagan

Users browsing this forum: No registered users and 7 guests