Wanna get together to pillage something, or just to have a bowl of pasta? Schedule it with your fellow Pastafarians here.

Ham, we did meet someone who flew out from Utah to attend the Rally and a Humanist event we attended. he said that his presence gave the Utah Atheists 100% attendance.
Top

Long version: The day started with me getting in the car service car at 4:30 am and driving to CitiField. At about 4:50 am we arrived at CitiField, which started the two big themes of the day: waiting in lines, and everyone at every level of the organization of this thing underestimating. There was a traffic jam of all the cars and taxis trying to get to the entrance; the driver was all like "it's 5 am and there's a traffic jam in Flushing Queens, WTF!?" So I get out and get in line for the bus. Oh, the line:

The perspective is a bit lost in the pic, but the line extended all the way down to those light on the side of CitiField and around the corner for another 50 feet, about 10-15 thick the entire way. They were supposed to start getting everyone on the buses at 5:30 am and everyone would leave by 6 am. HAH!

That picture was taken about 10 minutes before I left. Notice how light it got out. It was about 7:35 am when I left, I'm guessing the last of the buses left at about 8 am. The bus ride consisted mostly of me trying to sleep, eating a little, and peeing in the charter bus "bathroom"

. So, I didn't end up getting there until about 12:50 pm, and then waiting in line for tickets and riding the DC metro system chewed up another 30 minutes (I think I'm going to have to give the DC metro system its own little rant down in RR&M). I finally arrive at the National Mall at 1:20 pm. Now, finding either the Ubis or Qwerty at this point would have been nigh on impossible. The National Mall greens were packed. The side streets were packed. The stairs and public areas of the Smithsonian museums were packed. People even got up on the port-o-potties to get a view. CBS estimated the crowd to be 215,000 strong (by comparison, they totaled the Glenn Beck rally at 87,000

). And even if we had exchanged cell numbers beforehand, service was pretty much dead in the area. I only was able to communicate via text message with my brother who showed up, and those took a long time to send.

I can confirm, however, that I was keeping the pirate-y goodness flowing on the south side of the Mall:

I can also confirm that faith in the FSM is strong. I was surprised and delighted by how many positive cheers and cries of "I too have been touched by His Noodly Appendage!" I received over my sign and costume. One woman came up to approve of the sign was wearing the same FSM "fish" logo as a pin on her jacket. Me and my brother had a nice conversation about religion with a Pastafarian with red hair, a beard and a fedora. And then there was this guy, whose sign completely pwned mine:

People even took pictures of my sign on the NYC subway on the way home.

So the Rally ends, I head back to the metro at 3:30 pm, and encounter my last long, obnoxious line of the day at the Federal Center SW station:

(Seriously, DC metro system: DIAF) After that last bit of bleh, back on the bus, which was uneventful (well, except for those horrid bathrooms again). Arrived back in NYC around 9:20 pm, home at 10:20 pm.

The rally itself was worth it, even if I missed half of it. And I am going to have to watch it again on Comedy Central or the Internets. But to me, the whole of the experience almost wasn't about what was on stage, but the atmosphere. Sitting around CitiField talking with random folks, breaking into (bad) impromptu renditions of "Don't Stop Believin'", checking out signs, impressing some guy by telling him I saw Mitch Hedberg live. The human element is what made it special.

You can see all my pictures on my facebook photoalbum.
Top

Ubi Dubium continues to work on uploading photos. You can see us on FriendlyAtheist.com until we get them up here.

PKMKII, don't judge Metro too harshly based on Saturday. The demand on it was way beyond the available capacity. They might have done better if the crowd hadn't exceeded the official estimate by 155,000!

We too took a long time getting there. We left home at 8:30 am, for what was usually a 1 hour, 15 minute trip. If I had an appointment, I'd leave a 1 hour 30 minutes and be comfortable with that. It took 3 hours. In line at the station, we saw some great signs and costumes. We found Waldo for the first time. We found him about a dozen more times during the day. We met Mr. Spock who seemed to like our costumes and signs. A lot of people did. Many people took pictures of our small band of cutthroats, too. Our favorite sign while we waited was a very nicely done one with a photo of Pres. Obama labeled, "Not Hitler"; then one of Beck labeled, "Not Hitler;' and then one of Hitler labeled, "Hitler".

We waited at the designated gathering spot and met a young man from Long Island and his mom. After we waited for quite some time, the Flying Spaghetti Monster walked up and touched all of us with his noodly appendages! We were near a large group campaigning for legalized pot. Zombie Abraham Lincoln was there too. After a while, we tried to get into the rally itself and failed. We got separated from our Long Island friends at that point. We finally staked out a spot under a tree near the edge of the mall and watched the parade. Somebody argued with Ubi Dubium for a while thinking we were tea-baggers (the hats? I don't know) and he finally stopped and said, "Wait a minute. You're on my side!"

We took the Metro to Dupont Circle to join the American Humanists and the Friendly Atheist at a restaurant. Ubi Dubium was pleased to not only meet her favorite bloggers, Hemant and Richard Wade and especially pleased that Richard said he'd been looking forward to meeting her!

After another frustrating adventure on the Metro, we got off our train at the Dunn Loring station. As the train pulled out, we saw Qwerty waving wildly through a window! We did get to see him the next day; I'll let him tell of his adventure.

That evening, we left the Ubikids at home and headed for a friend's famous Halloween Party. We hadn't been to a party without the kids since we had them. Details will not be posted here. Because the party is limited to 21 and up, and we hadn't been willing to leave the kids behind before, we had not attended this particular party in prior years. Unfortunately, we were so tired from the Rally, that we left pretty early.

Anyway, we've been trying to catch up on what actually went on at the Rally. We never even got in range of a jumbotron! We did see people climbing trees and sitting on top of porta-potties to get a view. When you get that much sanity in one place, it's insane!
Top

OK, I've got a little while to post. Ubi Dubius is out working at the polls, and the kids have off of school today, so it's just me and the computer for a change this morning.

Rally Photos! I'm going to do something I really haven't done here before, and post real photos of the UbiFamily. My photos would be pretty boring if I didn't. First, here's us:

UDK#2's sign got cut off in the photo, but it says "Is this thing on?"

The subway was the problem in getting all of us together. Here's why:

Next time we try to get together we should exchange cell phone numbers in advance, but that might not have helped ths time, since all the local networks were totally overloaded. This is what the crowd on the periphery looked like. We never managed to squeeze our way in to the main bulk of the crowd. This was the steps of the National Gallery.

And some photos of the Afterparty. I'm going to throw in a few from Mike the Infidel and Hemant along with mine here, cause they got some really good ones of the party too.

We got to meet Hemant and Richard Wade! And they both seemed excited to meet me, which gave my ego quite a boost. Here's Hemant: 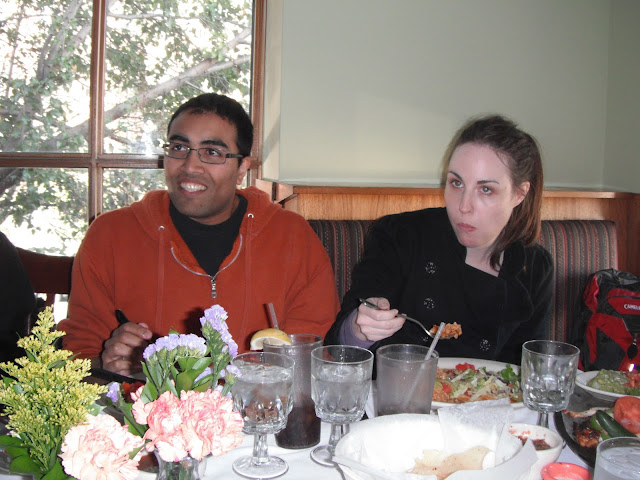 And us with Richard:

My noodly symbol got a little squashed in all the crowds: 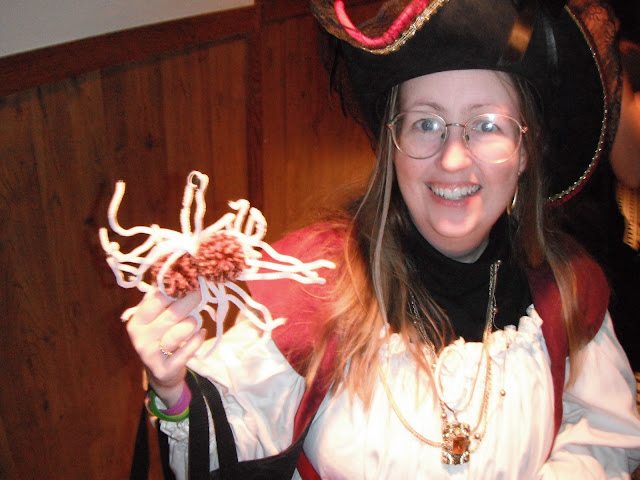 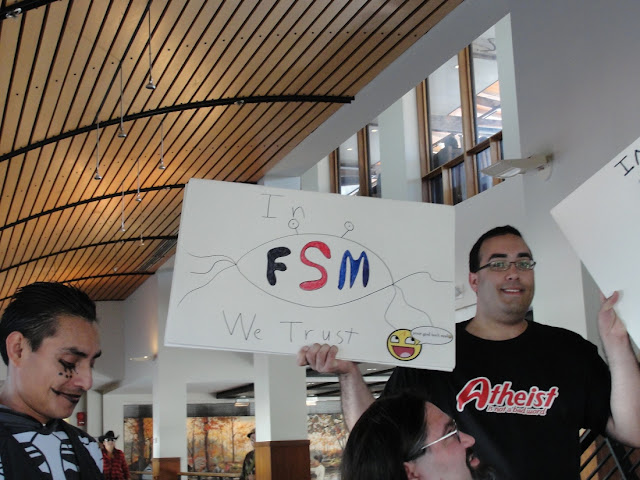 A good turnout at the party, but not nearly as crowded as the Rally:

Is that zombie Einstein I see?
Top

Thank you PK and Ubi Mom for sharing the pix!!

Looks like it was alot of fun except for the standing in line and being crushed by hordes of strangers part.
Top

Ubi Dubius reminds me a bit of PZ

You are my best friend forever.
Top

Ubi Dubius wrote:Somebody argued with Ubi Dubium for a while thinking we were tea-baggers (the hats? I don't know) and he finally stopped and said, "Wait a minute. You're on my side!"

See, that's why I went with an eye patch and pirate scarf (well, that and the Halloween store's pirate hats looked really cheesy).
Top

You are my best friend forever.

Consider this a bonus then

What does that make this, then?

If I actually had photoshop, I'd put PZ's face on every face visible. Especially that baby on the right. XD
Top