"That's What She Said"

Uther wrote:
See the pretty girl in that mirror there?

Just when I thought I was out....they pull me back in
Top

A rooster, staring disconsolately at an egg.

"If you must eat pork, have a bellyful."

"If you ever had the thought of owning a small holding then this gives you a good insight into how to start"
The smoke wafted gently in the breeze across the poop deck and all seemed right in the world.
Top

black bart wrote:
"If you ever had the thought of owning a small holding then this gives you a good insight into how to start"

"The universe in a grain of sand."

Chief engineer at CERN. Followed by the word "Oops!"

"NO! Not the buttons! Not my gumdrop buttons!"

Lady Gaga, after her latest outfit became the primary victim of a mob of sugar-crazed children.

If I have learnt anything, it is that life forms no logical patterns. It is haphazard and full of beauties which I try to catch as they fly by, for who knows whether any of them will ever return?
Margot Fonteyn

Casey Anthony to her jury, after the trial.

I FOUND JESUS!
He was in my trunk when I got back from Tijuana.

The incessant spittle-spraying bellow of the stained hobo who'd (against your repeated protests)- haphazardly smeared at your car's windshield with a gallon jar of muddy ditchwater and a grime-encrusted sweatsock. (Which,BTW, he never removed from his foot, displaying surprising flexibility to accompany the surprising upper-body strength he must have needed to cling to the side mirror/doorcrack of your vehicle throughout four increasingly panic-fueled right turns, before the telephone pole you lightly sideswiped managed to finally dislodge him.)

Later in the evening, you went back through the checkout line at Safeway a second time, so as to be able to put a second can of creamed corn into the donation bin tucked in next to the hand-sanitizing wipestation, thus assuaging the last lingering pangs of conscience.
You seem to recall him getting to his feet and hurling a rock toward your car as he grew tiny in your rear-view mirror...You're pretty sure he's fine.


"And then two she-bears came down and mauled forty-two of the youths."

So, Sarah Palin & daughter are looking for the media spotlight again?

By the time Ken Worley posts again I'll have finally worked out what he was saying last time...I think Ken Worley is actually 'Doug Stanhope": 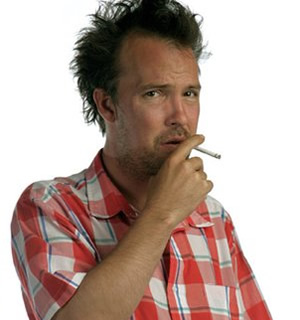 pieces o'nine wrote:But obviously, we've got to stand with our North Korean allies.

A spokesman for the minority stockholders of Nike inc., forgetting that the long hours their allies spend at their industrial stitching machines means that most of the asian 'tweens are unable to rise beyond a scoliotic hunching squat.


"Why do birds suddenly appear, every time you are near?"

"Why do birds suddenly appear, every time you are near?"

It could be because we smell of peanuts.
The smoke wafted gently in the breeze across the poop deck and all seemed right in the world.
Top
Post Reply
953 posts

Users browsing this forum: No registered users and 24 guests