Pryce is the second Bond villain they've had on the show, you could go for the hattrick and bring in Christopher Lee.But I think also think it's time to balance that out with some Bonds. What are Timothy Dalton and Pierce Brosnan doing these days?
Disclaimer: Anything I say on topics of Politics, Economics, Pychology, History, really anything not concerned with the natural sciences and mathematics and especially topics concerning human behavior and/or thoughts, that is not associated with a proper reference is pure speculation on my part.
Top

Yah , that equation adds up nicely .

I have just started watching Supernatural again , I watched the first season bit missed the majority of the episodes . I stopped watching because I found it a bit boring and something of a poor man's The Night Stalker ,of which I was a huge fan .
I have been resisting the urge for cable because i feel they want too much money per month so we have been buying a lot of DVDs .
My roomie picked up seasons 3,7,and 8 of Supernatural a week ago , since we hadn't anything else worth watching I gave them a go , mainly because i noticed Lauren easy on my eyes Cohan from The Walking Dead on the dust jacket .
I am now a fan , i love the humour and all the mythology , angels and such even though they take liberties with the source materials .
I had a great chuckle after the protagonists destroyed a demon disguised as a highway patrolman .The crane shot showed the boys covering up his( its) car with branches and we see it is numbered 54 .
I could here Herman Munster yelling , " CAR 54 ! WHERE ARE YOUUUUUU !
Har de har har !
Top

I finished watching season 7 of Supernatural , some funny stuff , that Satan is such an asshole ! Truly , what a prick !
Top

Not quite current, but I recently watched all 9 seasons of 'allo 'allo.
Disclaimer: Anything I say on topics of Politics, Economics, Pychology, History, really anything not concerned with the natural sciences and mathematics and especially topics concerning human behavior and/or thoughts, that is not associated with a proper reference is pure speculation on my part.
Top

Doctor Who showrunner Steven Moffat has confirmed he is leaving Doctor Who. His last series will go out in spring 2017 following a Christmas special, after which he will be replaced by Broadchurch writer Chris Chibnall. 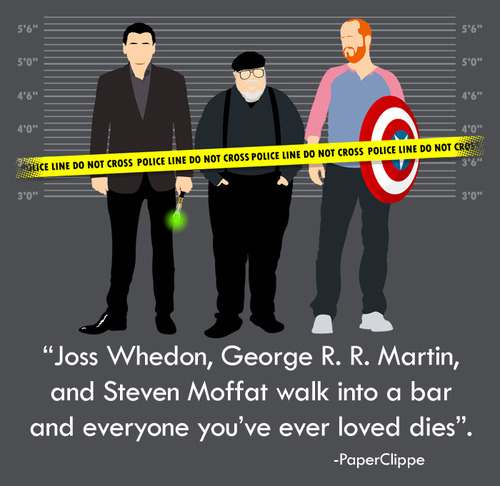 Watching GoT seasons 4 and 5 yet again . The Unsullied are underwhelming , i was expecting a Ninja/Spartan hybrid or a bunch of Bruce Lees .
Top

I've been watching the new season of G.O.T. While the first episode was very meh I have to say last week's was fantastic.
Get your bake on.

I wonder how they are going top the latest battle ?
I thought Hardhome was crazy but the Basturds battle was more outrageous than any sword swinging that I have yet seen on the silver screen .There must be at least two more epic battles to come , the suspense is killing me .
But I am thankful to have something to look forward to besides The Walking Dead and decent food .

Hmmmm , so it's confirmed by that Tower of Joy sequence , Jon should be on the Iron Throne .
Ned knew this !
Yet he still supported Stannis , what gives Georgie ?
Oh , and why on earth didn't they give Wun Wun a big hockey stick or scythe to mow down the Boltons ?
Or better yet , give the giant a few carts of hundred pound boulders to pitch at the Bolton army whilst out of archery range and suffer minimal casualties , if any .
Top

i am watching reaction videos of GoT and Walking Dead , they're a laugh with all the crying and hollering and carrying on .
Top

My brother hogs the telly from dawn to dusk .Most of each and every day he just falls asleep in front of it continually making these dying , sighing , LOUD !!!!! AAACKKKKKKs and other horrid sounds that have now completely driven me bonkers .
The programs he watches IMHO are a complete waste of time ie : game shows and ancient programs with cringe worthy acting , direction and dialogue . I cannot stand any of his favourite programs ,
I prefer educational programs ie : nature , science , documentaries and biographies from CBC , PBS and the BBC .
But I only get a chance to view anything is after midnight when I wheel him into his (my) room .
There isn't much worth watching in the early mornings and i am very put off TV now after coming across Nancy (dis)Grace , Christ on a stick !
I have since come to believe ( after much googling and youtubing ) that i find this woman just as repulsive as i do Ann Coulter .
The moment I see that scowling face or hear that irritating , grating voice , I cringe and rush about in a frenzy trying to find the remote .
The only verbal exchange I could/would have with someone like that is : oink oink oink , souweee souweee , squeeeee .
Top

Walking Dead in a few hours , The Cell is likely a big Daryl episode .
I am not sure if i will get a chance at it , Walking Dead and GoT puts my younger sib to sleep lol .
At the moment we are watching the remastered Star Trek TOS .
Top

Return to “Books and Authors, Films and Directors”

Users browsing this forum: No registered users and 2 guests