Hello my fellow Pastafarians. I've been following this movement for awhile now, but this is my first time posting in the forums. I wanted to share with you all my latest tattoo that I'm having done in His honor. I don't presume to know how He works, but I have faith that His Noodly Appendage has reached down and directed my tattoo artist to recreate His image on my arm. I just can't imagine how else something like this could have been done without our beloved "Intelligent Designer" directing things behind the scenes. ;)

It's still a work in progress -- one more session in about two weeks to get some color in the background and it should be complete. The arch behind His eyes is a mystical aura/dinner plate that will have some cooler colors (blues, greens) emanating from it.

The first image, below, shows just the black outline after it had healed for about two weeks. The second image is after color was filled in and was taken the day after the work was done, which is why it looks a little blotchy. I'll post another image shortly after it's finished.

The art was drawn and applied by Eric Eye ([email protected]) at Lucky Devil Tattoo Parlor in Seattle http://www.luckydeviltattooparlor.com/. He's a fantastic artist and I highly recommend him and Lucky Devil. I was surprised to find out that a number of people there had already heard about FSM and were excited about this tattoo when I came in with the idea. Word is spreading and His reach is far. 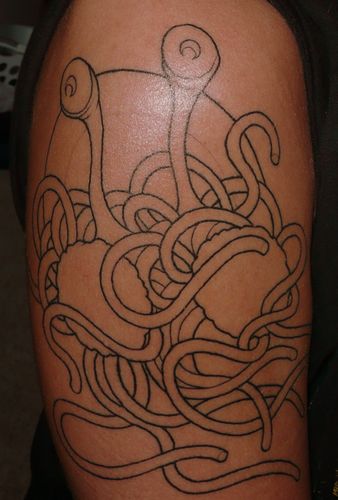 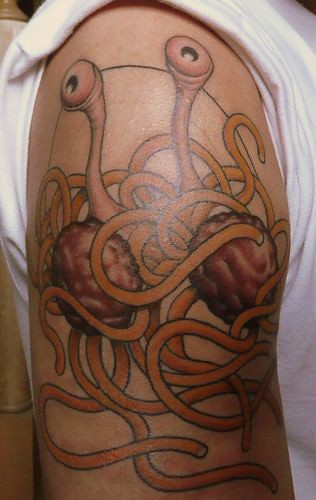 Argh! What a blessing, it is inked. Thus it must be true. I've got a couple myself, I know what you went through. Ramen.

Sanity is in numbers.
Top

I have a new FSM tattoo:

The aura around His Noodliness on my arm is now done. There's a little more work to do on it -- some shading and touch-ups, etc, but it's nearly complete. Here's the latest image: 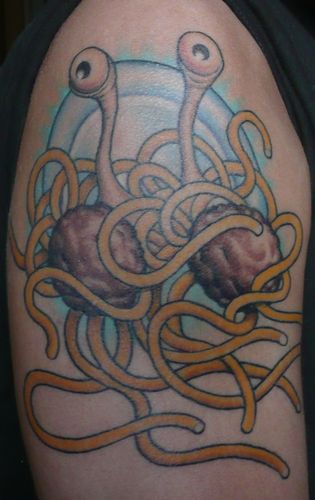 Return to “Art and Artistic Adaptations”